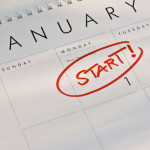 Do you believe in New Years Resolutions?

Life isn’t always easy – there can be no question about that. It’s unpredictable and it’s often hard to make sense of what happens. Some of the events in our journey end up being nothing more than minor irritants, while others are more like being hit by a Mack truck at 200 kph.

Regardless – we have to play the hand we are dealt.

Part of the process of coming to terms with whatever occurs in your life is to find a way to make sense of it. If science indicates that objective reality doesn’t actually exist, it is very much up to us to create a reality that helps us move on and find some meaning. As W Mitchell so accurately points out, ‘It’s not what happens to you, it’s what you do about it that matters’.

I like to think of it as choosing to ‘make chicken soup out of chicken shit’. And it is often in these times of desperation or perspiration that we accomplish our greatest achievements. We play the hand that we have been dealt and in so doing we stretch beyond the finite boundaries of probability and skill into the realm of possibility and inspiration.

For Christopher Reeve a random riding accident changed his life. Everything he was in terms of his career and how people perceived him vanished the instant he hit the ground. And yet he was able to muster his resources and master his own mind so as to find a reason to carry on. I’m sure becoming paralysed was not part of his life plan. I’m sure there must have been times that he was angry and bitter, but these feelings obviously didn’t consume him.

The simple truth is that Christopher Reeves found himself in a wheelchair at just 43 years old. Nothing could be done to change that. There was no way to wind back the clock and no way to repair the damage. His condition was permanent. But his state of mind and any negative emotions he felt were temporary and 100% within his control. He had two options: (1) let the event consume his life and extinguish his spirit or (2) accept his condition and make the best use of his time and influence to advance science in the hope that someday others with spinal cord injuries might walk again. In many ways, he became more of a superhero after his accident than he had previously been in his film roles because he created a vision and a purpose that was bigger than the event that changed his life.

He accepted the cards he was dealt in the game of life and he played with the courage, determination and strength of character of a superhero. Perhaps Christopher himself said it best, ‘I think a hero is an ordinary individual who finds the strength to persevere and endure in spite of overwhelming obstacles. They are the real heroes, and so are the families and friends who have stood by them.’

TODAY – is the perfect time for you to stand back and celebrate the superhero within yourself and others. If you choose to play the hand you’ve been dealt to the best of your ability…I think you will look back [someday] and agree that the “game” was worthwhile.