Could This Gun Dealer’s Story Help You Close More Sales? 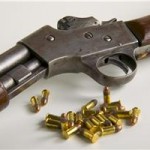 What’s the best way to grow your business?

When clients ask how to close more sales and  free up cash in their business, I like to tell the  story of Byron the guns and collectibles dealer. He lives for his business  because it gives him the chance to make a living out of doing what he enjoys  most: collecting.

He was struggling 12 months ago because he was out of cash and unable to buy  new stock. This was a real problem because the strength of his business lay in  constantly having new items to show off. New stock encouraged his customers to  come back often; no new stock meant they would tend to check out his competitors  first.

When I first walked into Byron’s shop, one of the most obvious items was a  beautiful old gun, proudly (and securely) displayed in a glass cabinet. I  couldn’t help but ask how much it was worth. He explained that it he had bought  it for $5,000 dollars, but was looking to sell it for $7,000. Following a hunch  that I had hit on his problem straight away, I asked Byron when he had bought  the gun. He didn’t remember exactly, he said, but thought it was about five  years ago.

I asked Byron how many other, similarly high value items he had in his store.  We went for a walk and in the course of showing me around, he pointed out at  least a dozen items which he had bought for over $5,000 over the last few years.  In each case, he was quick to tell me how much he was intending to sell the item  for, and the margin was always 30 to 40%. But the fact was he hadn’t sold these  items so they were costing him money and, most importantly, causing him to miss  the opportunity of buying new stock.

Byron had spent nearly $100,000 on expensive items over the years. The items  were attractive and valuable, but they weren’t particularly rare, so they  weren’t appreciating in value significantly. In effect, Byron had put $100,000  on the shelf of his office and left it there for all that time. In other words,  while he wasn’t borrowing money from the bank, in effect he was borrowing it  from himself. He had missed the opportunity to invest the money somewhere where  it would give him a solid return, such as in a term deposit or in blue-chip  shares. And he missed the opportunity of using that money to buy smaller, less  expensive items that he knew would sell quickly.  He needed to do something (and fast) if he wanted to close more sales.

Compounding all of this was the fact that the global financial crisis had  caused demand to drop markedly which meant his customers just weren’t coming in  or spending as much as they used to.

By making a few simple adjustments, responding to trends in the industry and  addressing a need that his customers, Byron was able to turn his business around, close more sales  and double his bottom line.

The first thing he did was to free up some cash by actively selling some of  his more expensive and slow moving items. He used online auction sites and his  own network to find buyers, while keeping his marketing costs low. In some cases  he had to sell the items for a little less than he had intended, but the benefit (when he was able to close more sales) was cash in his pocket.

The next thing he did was set up some systems to keep better track of  inventory. He started by recording everything and noting the age of all the  items (i.e. the length of time he had held it in stock). We agreed that in  future, any item that had not sold after 8 months would be reviewed. Byron would  investigate the item’s market value and decide whether or not it was increasing  in value sufficiently to be worth keeping. If not, he would act to move the item  on.

After a few months, Byron was making much smarter purchasing decisions. He  was still enjoying ‘collecting’ for his store, but his focus was different. His  focus was less on attractive, expensive but not-so-rare items, and more on  smaller items he knew he could sell quite quickly. To his pleasant surprise, he  increased cash flow by $100,000 in 3 months and found that by using this  strategy, he was able to do more shopping rather than less, because he had more  cash available to spend.

Lastly, but perhaps most significantly, Byron introduced 2 new complementary  strategies which literally transformed his business. To counteract the soft  demand for firearms and the relatively fixed, low margins, Byron convinced his  customers to purchase 18 months worth of ammunition upfront and he provided  storage (if required) onsite. This allowed him to renegotiate terms and pricing  with his suppliers, plus generate more cash flow in the short term. Since the  margins on bullets was much higher than on the guns themselves, his overall  profitability improved. In addition, Byron incorporated training and  certification into his standard offering and opened up his target range to  paying customers 3 nights a week. This allowed him to create new, highly  lucrative income streams and increase the frequency with which his customers  came into his business.

While Byron’s story on how to close more sales might seem unique and industry specific, there are many ways to take the overarching philosophy of what he did and utilize it to improve  your operating cash position.

How can you identify and start selling silver bullets in your business?  Begin by first examining the big picture…

Identify the items in your inventory that are essentially dead stock – i.e.  haven’t sold in over 8 months. Determine what the total value of the stock is  and devise a plan to convert it quickly into cash using a minimal amount of  advertising.

Focus on the gross profit margin of all of your products and services. Are  some of these more profitable than others? To improve your overall performance,  concentrate on the former, and improve or eliminate the latter. What items or  services could you add which would allow you to service a need, improve your  relationship with your customers and grow your bottom line?

Negotiate better terms and/or prices with your supplier in order to increase  the amount of gross profit you make on each sale. Consider which items you could  sell in bulk upfront to your customers and use this new volume to improve your  buying leverage or cut out the middle man.

Marketing should not be treated as a fixed and sacred cow in your business.  Do not spend another dime on marketing until you ensure that you are maximizing  the amount you retain on each sale to cover fixed costs. Also, only spend money  chasing customers and sales if you can measure the financial return that you  will get. Unless you are a multinational brand, money spent solely on branding  is wasted.

Make it easy for your customers to find you and see what you have to offer on  the internet. The database of potential shoppers that you have earned the right  to speak to, is in fact your greatest asset. What can you do today to add value, enhance their experience and close more sales?

Finally, examine the fixed expenses in your business. Identify whether or not  there is a cheaper, faster or superior alternative that doesn’t compromise  quality or customer service. Is there a way to shift how and what you do so that  fixed expenses can vary (i.e on a pay per use basis) with the level of  production and/or sales? And remember, no one has ever grown their business by  [exclusively] focusing on cost cutting – so use this tactic as your final step  in a comprehensive plan to get your business firing and hitting targets.  Your primary goal is to close more sales and increase the amount of gross profit (or contribution margin) that you make from each sale.