Are You Making This Common Mistake & Getting What You Don’t Want?

Rhondalynn Korolak get what you want, mindset, on the shoulders of giants, personal development, positive thinking, rhondalynn korolak, self help, subconscious mind 9 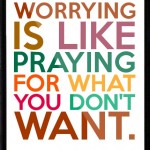 Have you ever heard somebody say to another person “Don’t spill that coffee”  and seen that exact thing happen, that you know will happen…. which is that  they do spill the coffee by accident!

Right now you are laughing because it is funny. It is funny because it  happens all the time. And if you are still laughing it may be because you are masterful at getting what you don’t want?

For some reason it seems the more you tell someone NOT to  do something, the more likely it is that it WILL happen. Why is that? Sometimes  we attribute it to simple disobedience – for example a child testing a parent,  when the parent has said “don’t do that.”

However, it is more than just a simple testing of the boundaries. There is a  biological, scientific reason for getting what you don’t want and it has to do with the way that our  brains are wired.

So why do we always seem to do the very thing that we are told not to do?

Our Subconscious brain struggles to process negatives. In effect it hears and  acts upon the command to do the very thing that we DON’T want it to do – i.e.  “smoke” or “spill the coffee.”

If you say to yourself over and over “Don’t spill the drink” or you tell a  child “Don’t miss the ball”, you are focusing the attention of the subconscious  mind on the opposite of what is desired. Instead of saying “carry the drink  safely to the counter” or “hit the ball son”, you have commanded the automatic  mechanism to do exactly what you DON’T want. The automatic mechanism of the mind  is focusing on missing the ball. It’s not that the mind doesn’t hear the word  “Don’t” (or cannot understand it) it’s that the ENTIRE SENTENCE is designed to  create the opposite of what is wanted. You have to look at the sentence in its  entirety to understand why it will not work to create the desired effect.

That is in fact why many books self help books, DVDs and audio CDs DON’T work  to deter unwanted habits and behaviours. Many of the NLP and hypnosis  practitioners have loaded their materials with embedded commands like “you will  not have any problems sleeping”, “you will not want to have any more cigarettes”  or “you will no longer have cravings for fried chicken and beer”. Unfortunately,  these programs are doomed from the start. They only serve to further entrench  these undesirable patterns.

If you want to change behaviour or get around a problem you must think of new  ways to phrase the desired behaviour in a positive way. This requires the  removal of all negatives or references to the problem in the sentence. Rather  than saying “Don’t mess up the calculations” you could say “Be careful to ensure  all the calculations in the spreadsheet are double checked and correct”. Instead  of saying to your child “Don’t throw that toy at your sister” you should say  “Put the toy down now and come to me”.

Instead of telling yourself what NOT to do, focus exclusively on what you  want do to (or have happen). It can be difficult for some to unlearn old  patterns and pessimistic language. However with practice and the positive  reinforcement that comes from achieving the results that you desire most, you  will find yourself speaking and behaving in new and empowering ways.